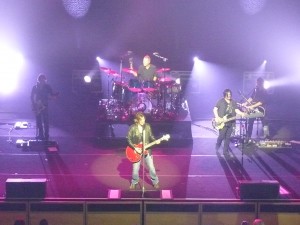 In the last twenty years or so, I’ve enjoyed a long list of great concert experiences, including Kiss, Bon Jovi, 38 Special, Boston, Fleetwood Mac, Gordon Lightfoot, Sugarland, and others. Now I’m thrilled to add the Goo Goo Dolls to my repertoire of live music memories. After last Saturday’s November 5th performance at the Maxwell King Center in Melbourne, Florida, I had to ask myself, “Why did I wait so long to see the Goo Goo Dolls live???”

The evening opened at 8:00 p.m. sharp with the edgy rock beat of Ryan Star, an American singer-songwriter from Long Island. Loud and energized, Ryan jumped into his first track, Brand New Day. And how appropriate, since it was great to hear a fresh rock voice emerge from the queue of rock star wannabes. Ryan’s act featured songs from his 2009 CD, Last Train Home, and his most recent effort, 11:59, which I’m inclined to acquire. His music got the King Center crowd fired up with a commanding stage presence and a megawatt show strong enough to power a small city. Despite Ryan’s unbounded energy, passionate vocals, and sizzling support from his lead guitar and keyboards, I felt his drummer stole the show. Amazing percussion! In my book, a superstar delivery on the drums, with a style reminiscent of a young Peter Criss from Kiss (sans the makeup of course).

Around 9:15, the house lights dimmed again, and the Goo Goo Dolls kicked off their Melbourne concert with Korel Tunador on the keyboards. The audience jumped to their feet, screaming, when founding members John Rzeznik (vocals, guitar), Robby Takac (bass guitar), and Mike Malinin (drums) took the stage. Joined by touring guitarist Brad Fernquist, the five man crew rocked the house from start to finish.

I’ve enjoyed the Goo Goo Dolls since high school, which seems like yesterday despite the reality of a two decade void. What had started from humble beginnings back in 1986 with John and Robby in Buffalo, New York, matured into a Grammy-nominated group with roughly nine million albums sold in the United States alone. Aside from their impressive credentials as a world-renowned band, what speaks to the heart of the Goo Goo Dolls is the unmistakable voice from the charismatic frontman, songwriter, lead guitarist, and vocalist premiere, John Rzeznik. Sincerity resonates with the lyrics from his music as if each song he’d crafted would be his last. For nearly two hours, the Goo Goo Dolls played hits from their various albums, including Let Love In, A Boy Named Goo, Dizzy Up the Girl (triple platinum!), and of course their latest effort, Something for the Rest of Us. As a fan who first caught their act years ago on a VH1 special, I found myself overcome with emotion during their concert when I heard Black Balloon, Broadway, Slide, Iris, Name, Let Love In, Dizzy, Naked, and my personal favorite, Stay With You.

The band’s masterful blend of introspective lyrics and brilliant melodies made me wish I’d experienced their live music sooner. Their gracious demeanor and thoughtful comments further added to their positive energy on stage. At times, John himself seemed caught off guard by his own emotion—reflecting, perhaps, on his own past experiences that helped foster some of his band’s greatest work. A poet at heart, I’m certain John will continue to write, record, and hopefully (fingers crossed big-time), tour Melbourne, Florida again.

Perhaps this concert felt extra special to me because it nursed an aging dream of performing live music in front of thousands. Or perhaps the night felt special because I’d brought my twin sons along to experience their first rock concert. In any case, it was a night to remember. And one I look forward to experiencing again.