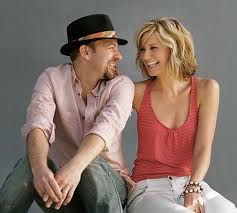 Sugarland—how sweet it is. I pray there’s a Sugarland in heaven when I die because I could spend eternity listening to their music. Fortunately, I’m alive and well. I’m also thrilled to share a little bit from my first Sugarland concert experience at the Amway Arena in Orlando, Florida on October 20, 2011.

The night opened with the music of Sara Bareilles, an artist I’d never heard before, which was not surprising since I gave up on radio years ago. What a pleasant surprise. Sara hooked me with her first note. Nice voice. Solid lyrics. And overall great music from a young singer-songwriter and her talented band. Sara Bareilles is definitely an artist I would pay to see again. Her forty-five minute set included a variety of songs from her albums Careful Confessions, Little Voice, and Kaleidoscope Heart. Truthfully, I enjoyed her music so much, I could have listened to her play all night. Life is full of surprises. This one I’ll remember for a long time.

After a brief intermission to reset for the main event, the lovely Jennifer Nettles took the spotlight on stage with her partner Kristian Bush. This award-winning duo, who form the nucleus of Sugarland, rocked the Amway Arena packed with screaming fans of all ages. Sugarland’s supporting band members, who played flawlessly by the way, included Annie Clements on bass, Scott Patton and Thad Beaty on guitar, Brandon Bush on keyboard, and Travis McNabb on drums.

I love Sugarland as a country music band with a little pop and light rock twist. You don’t hear a lot of slide guitar, banjo, fiddle, or other staple country music instruments. Instead, you hear inspired lyrics brought to life by Jennifer Nettles’ amazing vocals. In this vein of excellence, I enjoyed the guitar work of Kristian Bush and his cadre of fellow artists on stage. Speaking of the stage, I liked the minimalist setup Sugarland employed in their concert. Void of wild pyrotechnics or a troop of scantily clad female backup dancers (not that there’s anything wrong with those), Sugarland’s presence stayed true to their humble beginnings and emphasized substance over silly antics. The chemistry from this super-talented group could be felt throughout the arena, where they played hits from their albums Twice the Speed of Life, Enjoy the Ride, Love on the Inside, and the Incredible Machine. Their setlist included “Stuck like Glue,” “Tonight,” “Little Miss,” “Settlin,” “Everyday America,” “Baby Girl,” “Something More,” “It Happens,” and “Incredible Machine.”

Half way through the concert, Kristian carried an autographed guitar off stage and personally delivered it to an audience member. I couldn’t see the lucky recipient from my outer-orbit seat near the back, but I could sense the palpable excitement broadcast on the big screen monitors. And while the acoustics in the Amway Arena weren’t stellar, Jennifer Nettles’ singing voice could reach the gates of heaven. Collectively, the band sounded every bit as good live as they do on their studio albums. A testament to their talent.

The concert seemed a little short to me, but when you’re having a great time, you never want it to end. Love was definitely the theme of the evening, and yet ironically, one of my favorite Sugarland songs—“Love”—was absent from the setlist, along with a few other memorable hits like “One Blue Sky” and “Happy Ending.” No worries. I’ll put in a request on their fan site. Maybe they can play at my birthday party next year. Hey, a guy can dream, can’t he?

What an evening! Sugarland put forth one of the best concerts I’ve ever heard! I can’t wait to see them again. To Jennifer and Kristian: Keep writing. Keep singing. Keep doing what you love on stage. Your inspiring music touches millions of fans with heart-felt lyrics and positive energy that will capture and entertain generations to come.