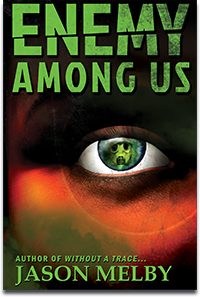 Enemy Among Us follows former FBI Special Agent Jim McLeary on a dangerous mission that tests his unconventional investigative skills and his determination to foster a new relationship with his estranged sons. Confronted by an adversarial female partner and an egocentric Section Chief with a hidden agenda, McLeary struggles to prevent an elusive enemy from releasing a silent weapon of mass destruction. Hindered by a tainted past, his quest for redemption in the eyes of his sons further complicates his operation and endangers the family he sets out to protect. In the end, he endures a gauntlet of double-agents, covert operatives, and a guilty conscience—before a deadly confrontation underscores his worst fears and reveals how the cost of victory may prove more than he can bear.

Enemy Among Us is available at Amazon, Barnes & Noble, Apple, and other major retailers.

“This is an action-packed book if ever I have read one! Superb writing, skilled intertwining of characters and events! Absolutely fantastic read!”

“Another good espionage thriller. Keeps you moving and I enjoyed the book very much.”

“I recommend this book to anyone who likes a good page turner.”

“I was impressed with the emotions, personalities, and heart of his main characters. The reader will quickly align with them, pulling for their victory.”

“Good spy thriller. Made me want to read more by this author.”

“This was a good read all the way through. Jason Melby is an author who keeps the reader’s attention to the very end.”